You are here: Home / Archives for Rachael Brinkman 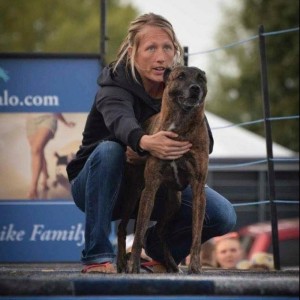 Mother of three while also running two dog training businesses, Rachael competes in Dock Diving, Flyball and Whippet Racing. Her goal is to set personal bests in every sport she plays with her dogs. Schizo, her eight-year-old Dutch Shepherd/Staffy Bull mix, took 2nd place in speed retrieve at the 2017 DockDogs World Championship with a 4.942 second swim (only beat by the world record). Slingshot, her three-year-old whippet, competed in his first Worlds in 2017 and had the longest jump (28’5”) of any dog there. Slingshot also has a personal best of 3.49 in Flyball and finished in the Top 10 out of 111 dogs at the 2017 Whippet Nationals. Both dogs are headed to the DuelingDogs World Championship in April 2018!

Dock Diving Competition Tips for Those New to the Sport

How to Pick the Best Dog Toy for Dock Diving

5 Steps to Introduce Your Dog to Dock Diving